I was really not feeling it. I had moved up to NorCal just a couple weeks ago and I knew I wanted to go to Point Lobos for some pics as the ones I saw on the web were very nice. It seemed like the perfect day--a Fri so it wouldn't be so crowded, clouds in the sky, and still Springish (heard Summer would be very crowded) and so there might be a colorful sunset. But there are just those days you don't feel like packing all the gear, doing a 70mi drive, and then stand around for hours taking pictures in solitude.

Well, anyway, did some stuff around the house for most of the day and then I started feeling a bit better and said aw hell, let's do it. Headed down, and man there was so much traffic! Google traffic lied!--1.5hr in traffic my ass! I was worried I was going to miss the 7:42 PM sunset (after I get there I'd still have to scope out a good place, and I've never been there before.) Well, ended up getting there sometime after 5pm, probably closer to 6pm, and it was looking pretty gloomy, like it was going to rain! No sun in the sky. So much for a sunset, ha ha.

Still... though that spectacular burning sky will remain elusive, I didn't drive no 70+ mi in stop-and-go traffic for nothing!  Point Lobos seemed rather small from the map, with lots of little turn-ins to park and enjoy, and so at the first stop I found I got out an surveyed the area.  It was a large cove before me with the ocean out in the distance with lots of rocks peaking from the water.  Not too bad.  Went back to the car and got my gear and set out to walk around.  Well, after climbing some rock stairs I found a nice seascape in front of me, and this little bird posing... 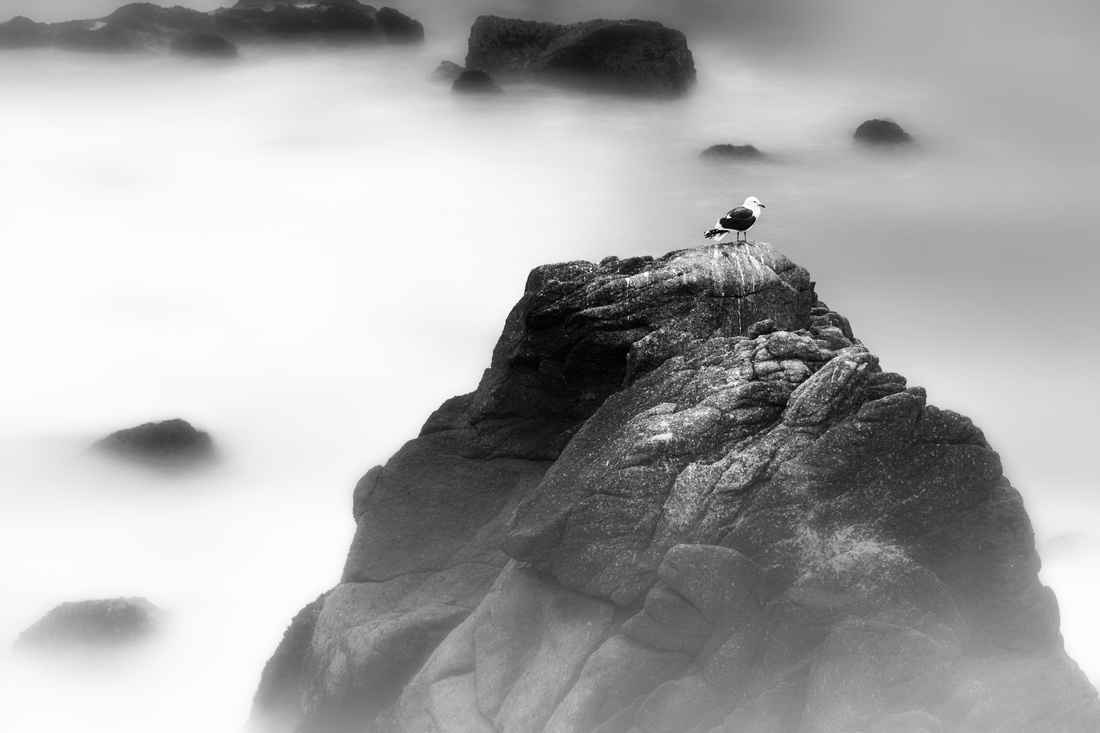 I snapped a bunch of pictures of it, but the sky was getting dark so I hopped back into the car and drove down to what I guess is the "point" of Point Lobos.  Got out of the car and started to hike the trail that was right there.  And man, it's pretty!  Walked around and found a few nice spots, setting up my tripod, snapping some pics, then packing it all up moving from scenic place to place.  Then eventually I decided this was where I was going to get "The Shot" of whatever meager sunrise decides to show up. 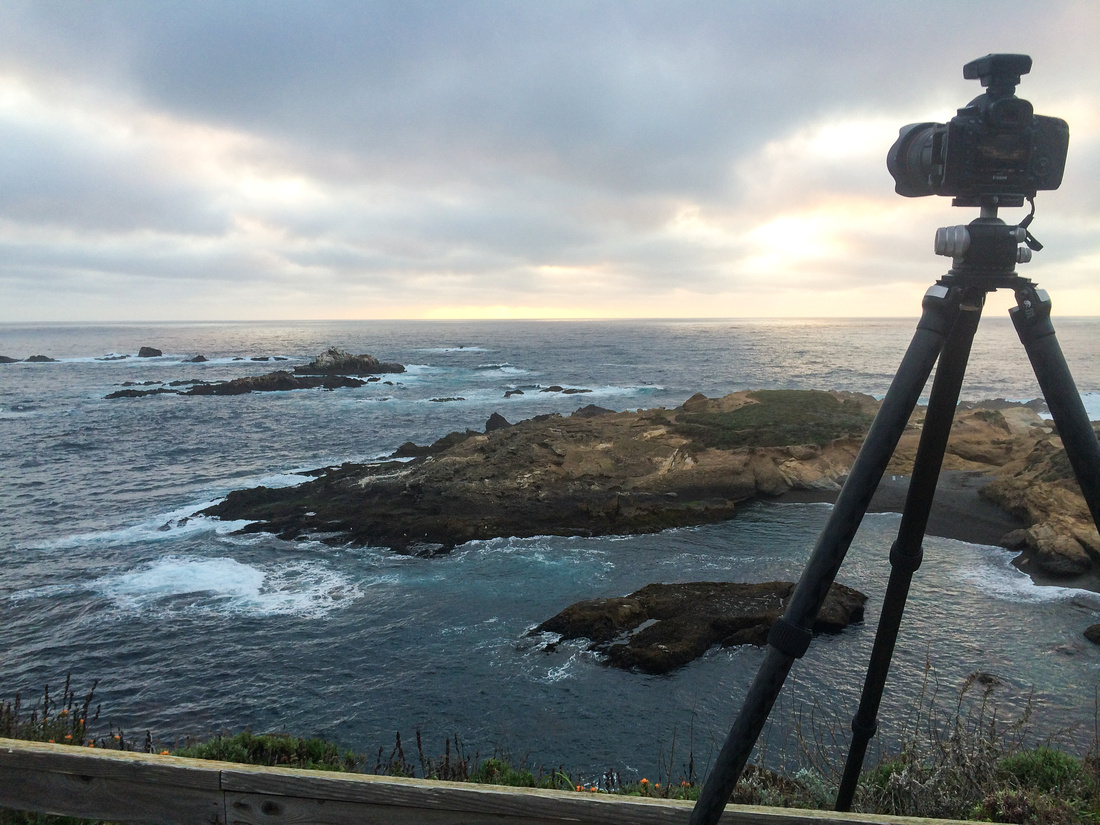 So with my tripod extended and my camera armed, I set off to capture a gazillion images.  Played around with ND filters and such, but I ended up liking the last bracket I took the best, which was without any filter... 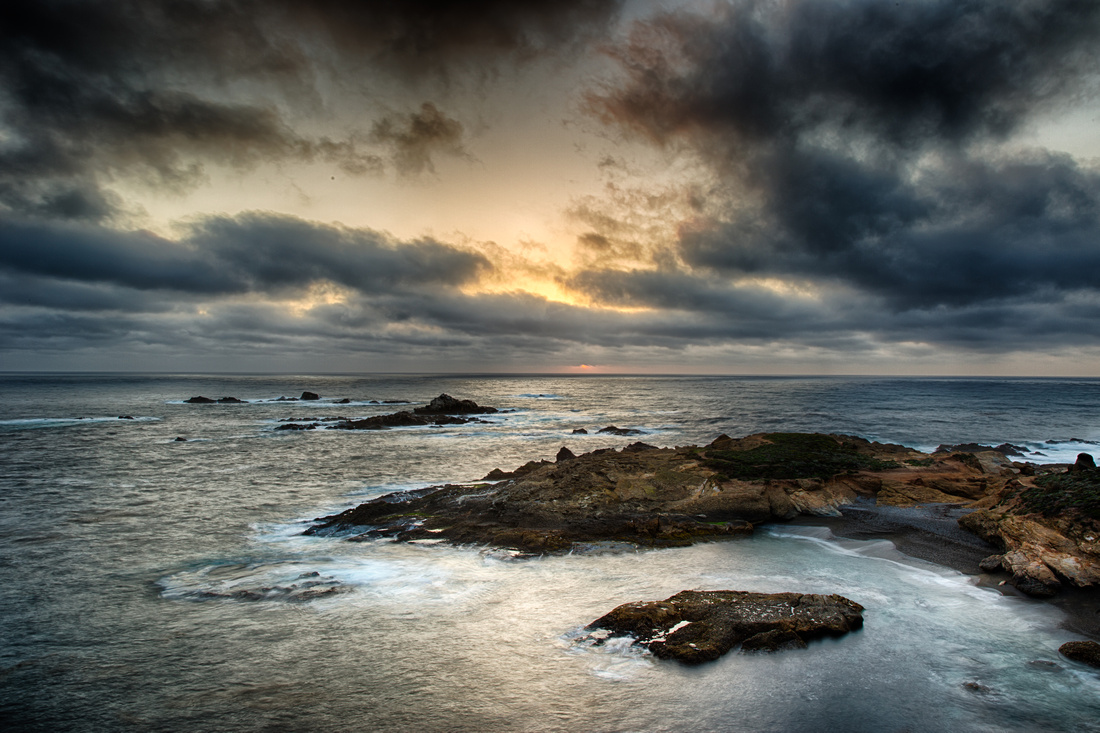 I wanted to capture the shimmering of the water as the weak sunset warmed it from above.  It did look beautiful as I stood there above the bluffs.

By the time I finished packing up from that picture, it was already getting pretty dark, but I thought the place closed 1.5hr after sunset (and I was wrong, but...) so I set off to see if there was anything left worth taking before having to go back.  So I found this place and took some time to get this: 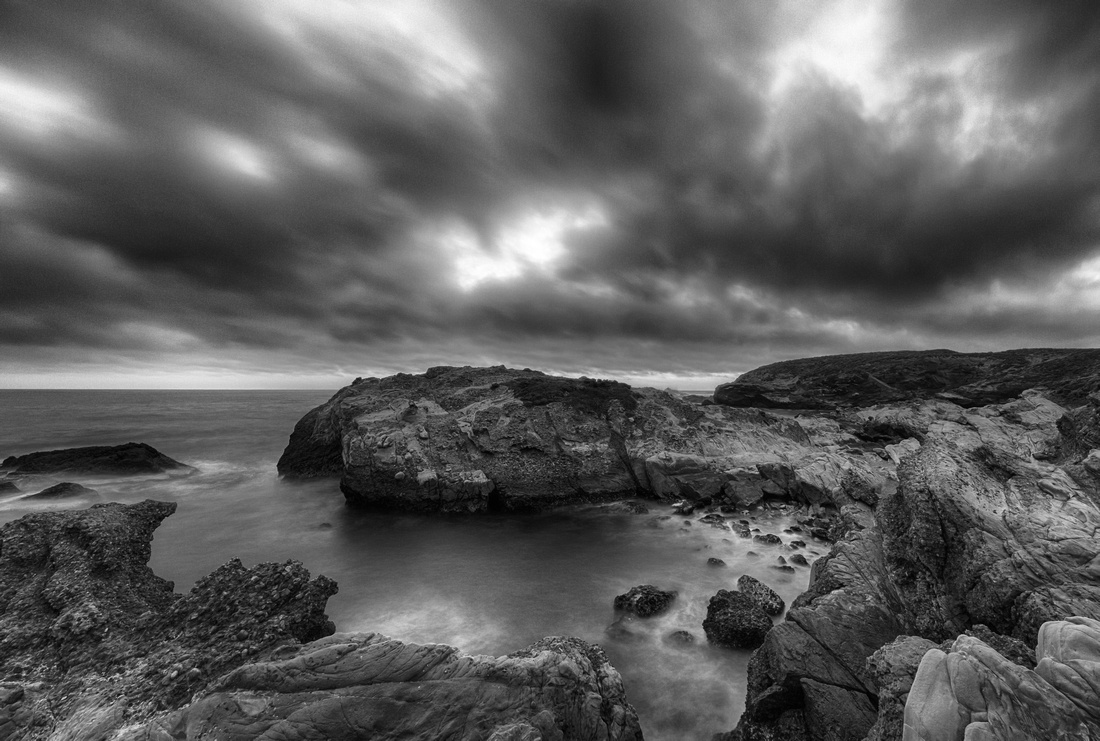 The original picture was extremely blue with little coloring from the rocks.  I had hoped that some of the earthiness with orange and red tones would come out, but it was far overcome by the blueness of the dark sky and water.  Black and white seemed the only way to go.  Well, anyway, by the time I finished it was already past 8pm and I was worried they would lock me in, so I put on my headlamp and headed back to the car.  It turned out I walked quite far away, so I was starting to get nervous trying to find my car.  And sure enough, as I approached there were blinking red lights.  Oh oh!...  The ranger truck drove over and gave me a little verbal reprimand, starting with "Where you live?  You ever coming back here again?"  I thought carefully about my answer and nodded... turns out they close just half an hour after sunset!--not 1.5hr!  Sigh, I misread.  Well, anyway, I apologized and he followed my car to make sure I went straight for the exit.

Point Lobos was beautiful, and I could tell under the right conditions there would be sublime pictures. But for this lonely and cold night, these were my takeaways... hope you liked!